Nicky and her husband Alis are the founders of Clayshape. Nicky graduated from Middlesex University in 1998 having studied 3D design, specialising in ceramics. Her work is predominately hand built and smoke fired but she is currently honing her throwing skills, having been taught to throw by Emmanuel Cooper during her degree at Middlesex. She spent many years working and travelling in Africa and used the opportunity to visit local potteries in Ethiopia and learn more traditional methods of production. She is influenced by the utility of hand built and thrown, but mass produced, ceramics from Ethiopia and the endless possibilities that playing with fire offers.

Nicky also works for a Water, Sanitation, and Hygiene consultancy and has recently been involved in supporting a social business initiative in Uganda that produces ceramic water filters and is looking to diversify its products.

Sarah was born and grew up in the South Yorkshire city of Sheffield, during the 1980’s, in an area known as Pitsmoor. As a teenager she moved to Colchester, Essex.

Sarah spent time travelling before settling in London, where she worked as a Personal Assistant for over a decade. During this time in London, Sarah took the opportunity to do what she had always wished, and that was to study and follow her artistic side.

Taking courses in photography and carpentry. Before moving into self taught costume design, pattern and block cutting for historical costume and draping on the stand. She studied Corset design and making at Wimbledon College of Art.

This self taught seamstress took small roles in assisting theatre companies with their costumes and film makers in the design and making of sets, props and costumes.

In 2012 Sarah Waters graduated from Textiles Foundation at Morley College, London and is currently studying for her BA Hons 3D Design and Craft. Sarah works predominantly in clay, but is utilising textiles in her work. She is focusing on the repeat of the repeat and figurative sculptural forms and is bridging the gap between art and craft. As wavering forms become reconfigured through studious and personal practice.

Under the tutelage of Nic Jones and Sarah’s tutor at university, she is currently learning to throw a pot on a wheel and is delighted to say, that she has now accomplished straight sides to her pots!

Teaching at Clayshape has given Sarah the creative output and focus to her work. As well as engaging with her students and seeing their thrill of delight in her medium.

She loves photography, hot cups of tea and day dreaming! Flouncing about on windy ridges and running and (singing) over the hills and there is nothing better than heading back to Sheffield to stretch her legs and breathe the fresh air of Derbyshire. 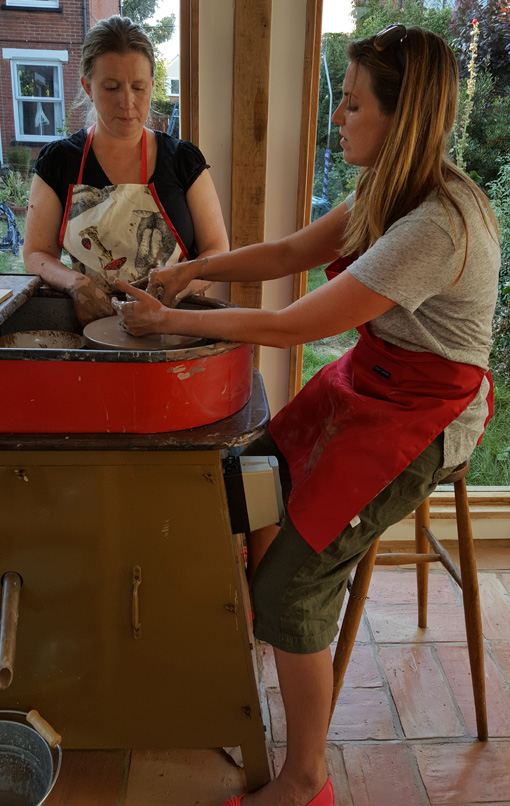 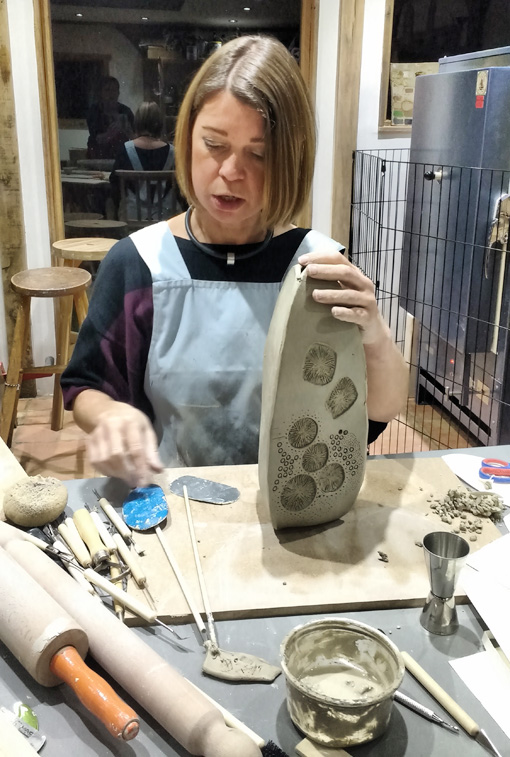